This is one article from my blog. To see more articles on my full blog click here! For PART 2 and other related articles click here! It has been a while since I’ve read an article that really surprised me with the amount of ignorance that spews out of some people. Newsbusters just published an article supposedly exposing the bias of climate change alarmists by not reporting on the “global cooling” that’s happening in Saudi Arabia. The recent snow fall and sub zero temperatures have disrupted the countries functioning in affected parts, and caused the death of two people. Besides the absurdity of the idea that “global” change of any sort is limited to a particular locale, in this case Saudi Arabia, these “liberal investigator” are absolutely ignorant of the way climate change works. This doesn’t really matter to them since the average person doesn’t know who climate change works either. So they don’t really need to understand anything beyond their own view point in order to propagate their anti-liberal slurs. (For the record I’m neither conservative nor liberal). That being said, the one thing that the “reporters” at Newsbusters were right about was that there was no reporting of the anomalies in Saudi Arabia’s weather by the North American News Media until a few days after. This is not to say that the “liberal media” is trying to hide the facts, but simply that the media in general is not a perfect entity in reporting on the happenings of the world. Before we start, I think we can safely establish that snow in Saudi Arabia doesn’t mean the entire world is going to freeze. No where in the hypothesis of climate change or global warming, or any science for that matter, do we rely on a single point of data for testing the truth of a phenomenon. To explain a bit about how Global Change happens we need to lay down some principals on how our world works. First of all, The source of the energy on Earth is oil, right? Wrong, the source of the Earth's energy is the Sun. The Sun's heat reaches the Earth driving the basic mechanism of converting this energy into organic life in plants, all the way to driving the movement of the ocean current and the atmospheric currents. Now, when the energy from the Sun reaches the Earth a large portion is reflected back to outer space and a portion is absorbed by the atmosphere. The Heat that does reach the Earth's surface is absorbed during the day and is re-emitted into the atmosphere over night (and is why it is cooler at night). As you may know the gases that make up the atmosphere are responsible for retaining some of this heat so that the ambient temperatures are tolerable for life (otherwise it would be too cold to live on Earth, like Mars).Credit: NASA Secondly, the atmosphere is contiguous. That means that all geographic parts of the atmosphere are connected and are dynamic in their interactions with each other. In other words it’s all one bunch of air that moves around depending on the over all climate, and the weather at the time. It’s important to clarify that climate and weather are too different things. Climate is the average temperature and precipitation of a particular part of the world all year round for many years. While weather, on the other hand is a short snap shot of the temperature that occurs in a day or a few days, in a small area of the globe. So when we talk about global warming, we are referring to the global climate, since you can’t have a one uniform weather condition all around the world for an extended period of many years (at least not yet). What you can observe is a global climate; an average of temperature and precipitation over a long period of time all around the world. This is what we refer to when we talk about climate. Thirdly, there are dynamic mechanisms in the oceans that play an important role in maintaining the global climate. These mechanisms can be offset using the right magnitude of change. What is known as the Oceanic Conveyor Belt, is driven by salinity changes in the oceans' waters, as well as temperature gradients. These current distribute heat to different parts of the world. Credit: NASA To be continued...(coming next how climate change works, and how snow in Saudi Arabia can be reason for concern)

"Ruin has appeared on the land and sea, because of what the hands of men have earned, that He may give them a taste of some of their deeds: so that they may turn back (from thier evil)." Quran: The Romans ch. 30 v. 41

To See Islam's Teachings About the Environment click here! Taken by my wife on our Honeymoon. 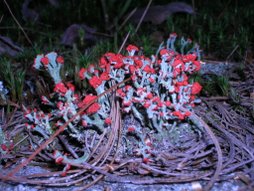 Cladonia cristatella. A Lichen which is from the Kingdom of fungi. Found in moist parts of North America. This particular sample is from the Ogilvie Grounds of Deep River, Ontario.